There is a great deal packed into a small space on the island of Cyprus in the eastern Mediterranean. Not only does it abound with good beaches and holiday resorts, but its relatively tiny landmass is riddled with the relics of ancient history, from the beehive huts of primitive man to classical Greek and Roman ruins, and everything imaginable in-between.

A thousand years is but a blip in time in the long history of Cyprus, but it was that long ago that the city of Nicosia (also known as Lefkosia) became its capital. Today Nicosia is unique in Europe because it is divided by the 'green line' that bisects the whole island, dividing north from south. The line, which serves as a United Nations peacekeeping buffer, was drawn in 1974, when the Turks invaded and took over the north. Most of the tourism development since then has taken place in the southern Government-controlled sector, and the political divide, even in Nicosia itself, has not dampened the island's appeal as a major holiday destination.

The charms of Cyprus are many and varied. For a start the weather is sunny and dry for most of the year, and the encircling sea is blue, clear and enticing. There are modern luxury hotels in the coastal resort towns, historic restored city precincts to explore, tavernas and nightlife aplenty. Cyprus has remote picturesque mountain villages and monasteries, beautiful churches, Crusader castles and fascinating museums.

The local people are extremely welcoming of tourists, happy to share with them their innate love of life and camaraderie. In Cyprus it is possible to mingle with crowds, or seek isolation off the beaten track as the mood takes, even in peak holiday season. For this reason the island is also a favoured destination for honeymooners, a reputation enhanced by the fact that legend has it that Cyprus was where Aphrodite, Greek goddess of love, rose from the sea. 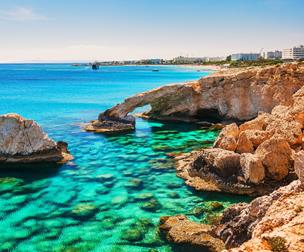 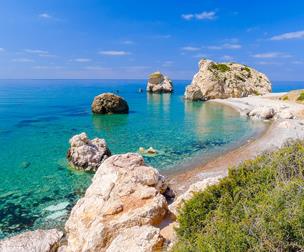 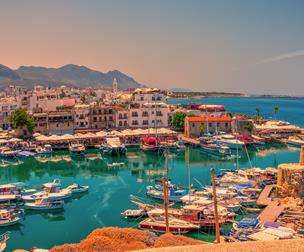 Steeped in hundreds of years' history, it's no wonder Cyprus offers some of the most exciting and fascination sightseeing opportunities in Europe.

Visit the Archaeological Museum in Nicosia to view artefacts dating back to over 8,500 years ago or explore the site of the first discovered Neolithic ruins of Choirokoitia just north of Larnaca. Marvel at the striking mosaic floors in Paphos dating from the third century AD; visit the mystical Catacombs where visitors are greeted by a pistachio tree laden with pieces of cloth, or for a romantic side trip from Paphos, visit the natural grotto on the Akamas Peninsula near Polis (30 miles/48km north of Paphos) where legend has it that the Greek goddess of love, Aphrodite, used to take her baths.

The public transport system is reliable enough and can get you to most major cities, however, one of the best ways to get a real feel for the country and to explore everything it has to offer is to hire a car or moped and take yourself on a leisurely tour round Cyprus.

Business in Cyprus is best conducted face-to-face, as developing a working relationship based on trust is important. Business is conducted formally, and dress should be smart and conservative (a suit and tie are the norm). Greetings are usually made with a handshake, and business cards are exchanged. It is common for women to hold high positions and they are generally well respected in the business world. Punctuality is important, but meetings may not begin on time. Business hours can vary according to the season, but are usually 8am to 1pm and 4pm to 7pm Monday to Friday in summer, closing at 5pm in winter.

Cyprus enjoys a Mediterranean climate, with abundant sunshine year round. Long dry summers and mild winters are separated by short autumn and spring seasons. Summer is a time of high temperatures with cloudless skies, but the sea breeze creates a pleasant atmosphere in the coastal areas. Winters are mild, with some rain and snow on Troodos Mountains.

The international access code for Cyprus is +357. The outgoing code is 00 followed by the relevant country code (e.g. 0044 for the United Kingdom). Area codes are not required. Mobile phone operators use GSM networks and have roaming agreements with most international operators, but not the United States. There are public phones in all towns and villages and can be used for domestic and international calls. Phone cards can be purchased from shops, banks and post offices. Internet cafes are available in the main towns and resorts.

Avoid taking photographs near military establishments. Religious customs such as Ramadan should be respected, particularly in the north where most of the Turkish Cypriots are Muslim; avoid eating, drinking, smoking and chewing gum in public during the holy month. Women should dress modestly.

Travellers to Cyprus over 17 years arriving from non-EU countries do not have to pay duty on 200 cigarettes or 100 cigarillos or 50 cigars or 250g smoking tobacco; 1 litre spirits with higher than 22% alcohol volume or 2 litres spirits or aperitifs with less than 22% alcohol volume, or 2 litres of wine; 50g perfume or 250ml eau de toilette; 500g coffee; 100g tea; medicines for personal consumption; and other goods to the value of EUR175. Prohibited items include fresh fruit, meat and dairy products.

No vaccinations are required. Travellers are advised to avoid eating fruits and vegetables unless they have been peeled or cooked. Health services on Cyprus are of a good standard. UK citizens should bring with them a European Health Insurance Card (EHIC), which enables them to receive free emergency medical treatment. Medical fees are reasonable in Cyprus, but supplies are expensive. Medical insurance is advised.

The majority of Cypriots speak Greek, and a small percentage speaks Turkish. The Greek Cypriot dialect differs from mainland Greece. English, German and French are spoken in tourist areas.

The currency is Euro. Major credit cards are accepted at most establishments. Money and travellers cheques can be exchanged at banks, open from Monday to Friday. There are ATMs spread throughout the island, operating 24 hours a day.

Travellers, except EEA nationals, should hold an onward or return ticket and documentation necessary for that journey, as well as sufficient funds for the period of intended stay in Cyprus. It is also advisable to have a hotel reservation. Nationalities that require a visa are recommended that their passport is valid for at least six months beyond the period of intended stay. Extensions are available to visa-exempt nationals.

Travellers should note that foreigners entering Cyprus north of the UN-patrolled 'green line' are deemed by the Government of the Republic of Cyprus to have entered illegally, and can be fined when crossing to the south (EU). Policies and procedures are subject to sudden changes, and visitors should check on the current situation before departing for Cyprus. NOTE: It is highly recommended that your passport has at least six months validity remaining after your intended date of departure from your travel destination. Immigration officials often apply different rules to those stated by travel agents and official sources.

The terrorist threat is low, and crime against tourists is rare.

A 10% service charge is levied in hotels and restaurants so a tip is not obligatory, but small change is always welcome. Taxi drivers, porters etc, appreciate a small tip.