100% protection. We are fully a licensed & bonded Irish company since 1978

Comprised of two large islands (separated by the Cook Strait), as well as Stewart Island, hundreds of coastal islands and many regional islands, New Zealand is a country of snowcapped mountains and scenic landscapes - north to south.

Travellers from around the world come to New Zealand to participate in extreme adventure sports, such as bungee jumping, sky diving, glacier hiking, kayaking and river rafting, but it's the dazzling landscapes of New Zealand that are the country's major tourist attractions. A few of the favourite attractions on North Island include Auckland, the Bay of Islands, Tauranga and the Bay of Plenty, the Rotorua area with its boiling mud pools, geysers, hot springs and steam vents, and the charming capital city of Wellington. North Island is also home to snow-capped volcanic peaks, including Mount Ruapehu, Mount Ngauruhoe, Mount Taranaki and Mount Tongariro. On South Island, not-to-be-missed sites include Fiordland National Park and Milford Sound, Mount Cook National Park, and the cities of Christchurch, Dunedin and Invercargill. A visit to New Zealand would not be complete without enjoying the history of the Maori culture - maintained and displayed in over 10,000 sites across the country.

The signing of the Treaty of Waitangi in 1840 was New Zealand's founding document, an attempt to settle disputes between the European settlers and the Maoris, conceding the country to British rule while guaranteeing the Maori people possession of their land and cultural identity. Today, integration has been replaced by a policy of upholding two different cultures alongside each other. Their shared love of sport, most notably the revered national sport of rugby union, and their enthusiasm for adventure and the outdoors is the unifying factor among the whole population.

New Zealand is an easy and compact place in which to travel and its spectacularly dramatic landscape alone, famous for its setting for the 'The Lord of the Rings' film trilogy, makes the long trip to these southern islands more than worthwhile. 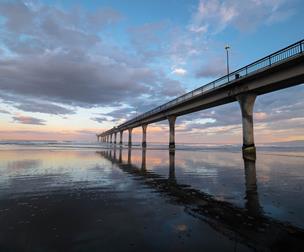 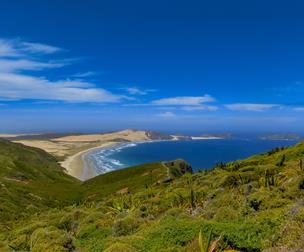 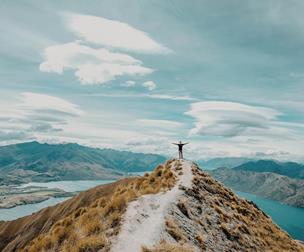 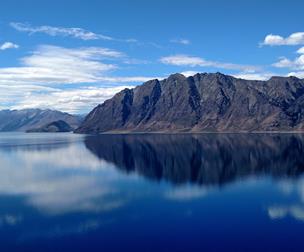 There is so much to see and do in New Zealand that it is difficult to know where to start. This is, after all, the self-styled 'adventure capital of the world', where you can bungee jump, zorb and sky dive to your heart's content. The splendid natural landscape lends itself equally well to hiking (they call it 'tramping' here), mountain biking, and general sightseeing.

New Zealand is also developing other sides to its tourist offering with a burgeoning wine industry, fascinating Maori culture, restorative thermal pools and natural spas, and plenty of tours themed around The Lord of the Rings, which was filmed at locations around the country.

Getting around is a breeze. You can cycle, or rent a camper van or motor car. In general the roads are excellent and very safe and there are plenty of domestic flights for getting between north and south islands destinations.

There is no bad time to visit either. It does get cold in winter, particular in the south island, where Otago can dip to -10°C, but overall the climate is pretty welcoming all year round. Local tourism picks up around the summer break of mid-December to end January. Book well ahead if you intend visiting over this period.

Ranked an unbelievable 3rd in the World Bank's Ease of Doing Business rankings, those looking to do business in New Zealand are sure to find that the corporate atmosphere of the country is well-suited to their ambitions. The business culture of New Zealand conforms to a typically British model - being formal, reserved, and conservative. However, New Zealand's corporate culture distinguishes itself from the metropole with its characteristically Antipodean warmth and friendliness, creating a relaxed, yet professional atmosphere, in which rewarding personal relationships may be developed among associates. The general approach to management in New Zealand is hierarchical, with decisions being made by senior-level executives - though ideas, input and collaboration, from all members of the organisation, are also highly valued in the New Zealand workplace. Business etiquette in New Zealand will be familiar to those who've worked in western corporate environments before. Use titles, until instructed not to do so, and maintain eye contact when speaking to your associates. New Zealand businessmen tend to favour forthrightness, honesty and hard work over self-aggrandisement and empty promises - they will be far more interested in what you actuallydo, than what you merely sayyou can do. Business meetings should be scheduled at least a week in advance, and then confirmed a few days before they are due to take place. When raising an idea or responding to someone else's, present your point directly, and back it up with facts and figures - while a relaxed, human-orientated atmosphere is prized in the New Zealand workplace, business decisions remain unemotional, and motivated by the business' best interests. The dress code for business in New Zealand is difficult to pin down, though you should always appear well-groomed and presentable. For a first meeting, men should stick to a dark suit, worn with a tie; and women, should wear a smart dress/business suit/pants suit, and limited accessories. The official language of business in New Zealand is English, and business hours are generally from 8.30am (or 9am) to 5pm, Monday to Friday; and 9am to 12.30pm on Saturdays.

The international access code for New Zealand is +64. The outgoing code is 00 followed by the relevant country code (e.g. 0061 for Australia). City/area codes are in use, e.g. (0)9 for Auckland and (0)4 for the Wellington region. Vodafone offers GSM 900 coverage in and around the main cities and popular holiday areas. Internet cafes are widely available.

Quarantine procedures mean that strict bio-security regulations are in place at immigration points into New Zealand. It is illegal to import most foodstuffs, and care should be taken when importing wood products, golf clubs and shoes (which may have soil and dirt attached), and items made from animal skin. The immigration arrivals card has full details.

Travellers to New Zealand over 17 years do not have to pay duty on 200 cigarettes or 50 cigars or 250g tobacco, or a proportionate mix of these; 1.125 litres or 1 litre spirits or liqueurs, and 4.5 litres wine, port or sherry, or 4.5 litres beer. Goods exceeding the allowances must be declared. Personal effects not dutiable include items such as jewellery, binoculars, portable radios, prams, camping equipment, cameras and video cameras. Prohibited items include concealed firearms, foodstuffs, animals, plants and plant products. It is forbidden to export Greenstone, Maori antiquities and Paua shells (unless they are products manufactured from such shells). Prescription medications need to be accompanied by a doctor's letter and the original prescription, they should not amount to more than three months worth of the medication. Food, plants, animals (alive or dead), equipment used with animals, biological specimens and equipment such as used camping gear, used bicycles and golf clubs all need to be declared in the Customs Biosecurity/Quarantine section.

There are no health risks associated with travel to New Zealand. New Zealand's accident compensation scheme (ACC) covers emergency treatment for visitors, but health insurance is recommended to cover any additional charges and for those not entitled to free emergency treatment. Those intending to participate in adventure activities, such as bungee jumping, white water rafting, etc should ensure that their travel insurance covers these types of activities.

The official languages in New Zealand are English and Maori.

Local currency is the New Zealand Dollar (NZD), divided into 100 cents. Most businesses accept MasterCard and Visa, and while Diners Club and American Express are also widely accepted in the main tourist centres, they might have limited acceptance elsewhere. Travellers cheques and foreign currency can be exchanged at banks, bureaux de change and some hotels. ATMs can be found in all towns and cities.

All foreign passengers to New Zealand must hold return/onward tickets, the necessary travel documentation for their next destination, and proof of sufficient funds to cover their expenses while in the country (usually NZD 1,000 per month, or NZD 400 if accommodation has been prepaid). Note that all visitors must obtain a permit to enter Tokelau from the Tokelau Apia Liason Office in Apia, at least two weeks prior to travel. NOTE: It is highly recommended that your passport has at least six months validity remaining after your intended date of departure from your travel destination. Immigration officials often apply different rules to those stated by travel agents and official sources.

New Zealand has a reputation as one of the safest destinations in the world, however sensible precautions against petty theft are still advised.

Gratuities are not expected in New Zealand and service charges are not applied to bills, but it is acceptable to tip at your discretion