With snow-capped Alps, forested hills, fairytale castles, Renaissance cathedrals, shimmering lakes, stylish spas and luxury ski resorts - it's easy to see why Switzerland has been one of the world's top tourist destinations for the past two centuries.

It is the country that fashioned tourism, so it's no surprise that Switzerland caters to visitors all year round. In spring and summer it offers lakeside chalets, mountain trails and spa resorts. In the sunny southern region of Ticino, near the Italian border, visitors will find palm-fringed Riviera-style resorts offering a host of water sports. Those keen on hiking and mountaineering will find over 31,000 miles (50,000km) of mountain and forest trails throughout the country.

In November the country's ski resorts begin opening, and visitors pour in throughout the Christmas season and until the snow begins to melt with the onset of spring. With the highest pistes in Europe, Switzerland's ski runs offer reliable snow and breathtaking views. Most resorts also have plenty to do for those not so keen on skiing, making Switzerland the perfect destination for a winter fantasy of log fires, fondues and glistening snow.

Switzerland's cities are pristine and beautifully laid out with famous Swiss precision. Zurich is widely held to be the intellectual and artistic centre of the country, sporting incredible architecture and more than a thousand fountains, with many museums and galleries. Geneva is the principal city for the international community, and is home to hundreds of world organisations. Its setting on the shores of Lake Geneva gives it a romantic atmosphere, and the city has an exciting, if rather expensive, nightlife. 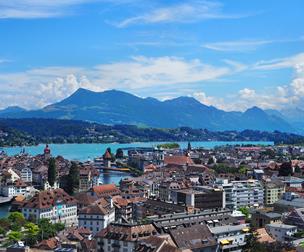 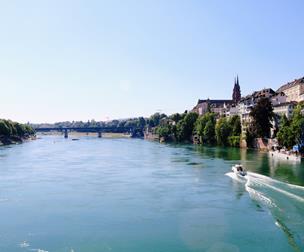 Sightseeing in Switzerland is feast for the senses with plenty of gorgeous, soul-stirring scenery and picture-perfect cities and villages to experience. Switzerland is a country that exudes wealth - after all, this tiny nation has more millionaires and mountains per capita than anywhere on earth. Its many riches have made Switzerland one of the very earliest tourist destinations, and as a result the country is well geared for visitors.

Getting to Switzerland's many attractions is effortless, if rather expensive. The rail network is clean and efficient, with other public transport filling in the gaps between. Alternatively, with impeccably maintained and signposted roads renting a car becomes an attractive option.

With cold winters perfect for skiing and mountain viewing, and glorious summers to enjoy the exciting cities of Geneva and Zurich and the charming Alpine villages, Switzerland is truly a year-round destination. Packed into its modest boundaries you'll find the very best of Europe in a highly accessible package that will keep you coming back for more.

Punctuality is vital for business meetings throughout Switzerland. However, styles of business negotiations vary from the Swiss-German to the Swiss-French/Swiss-Italian side. Swiss-German business meetings are rarely over food and are often as brief as possible with little small talk. But the Swiss-French and Swiss-Italians often meet over lunches and talk is not restricted only to business. Prior arrangements and preparation is essential for both and it is important to dress smartly; business suits are the norm for meetings. Handshakes are common for addressing both men and women. Business hours are generally 9am to 12pm and 2pm to 6.30pm Monday to Friday.

The temperature is moderate with no extremes of hot and cold, so Switzerland can be visited at anytime of year. Summer is warm to hot lasting from about June to September, and although good for outdoor activities it is also the most crowded time for a holiday. Ski resorts open in late November and remain so until the snow begins to melt in April.

The international country dialing code for Switzerland is +41. The outgoing code is 00, followed by the relevant country code (e.g. 0044 for the United Kingdom). City/area codes are in use e.g. (0)22 for Geneva. Mobile phone GSM 1800 and 900 networks operate throughout the country. Internet cafes are available in the main towns and resorts; some public phone booths also have Internet and email access.

Privacy and discretion are highly valued in Swiss culture, and strangers generally do not speak to each other. The Swiss are naturally reserved and conservative, and prefer structured rules to govern their daily lives. Littering is a serious social crime in Switzerland, and you should also make an effort to throw your recyclables in the proper receptacle. French and German-speaking Switzerland have different customs in some areas. When being introduced to someone, German-speaking Swiss will shake hands, while French-speaking locals may kiss on the cheek three times (generally left, right, left). While many Swiss speak English, it is considered polite to inquire before attempting conversation.

Travellers to Switzerland over 17 years do not have to pay duty on the following items: 200 cigarettes or 50 cigars or 250g tobacco; 2 litres alcohol up to 15% and 1 litre alcohol over 15%. The maximum allowance of wine is 20 litres, but duty will be payable on this quantity. A reasonable amount of personal effects and gifts (including perfume) to the value of Sfr200 for residents of Switzerland and Sfr100 for other travellers. Restricted items include meat and meat products from selected countries. Prohibited items are absinth and anaesthetics.

Electrical current in Switzerland is 220 volts AC, 50Hz. Plugs are of the linear, rounded three-pin type, but rounded two-pin plugs will fit the outlet.

Swiss medical facilities and health care are among the best in the world, but very expensive and health insurance is recommended. Immunisation certificates are only required if the traveller has been in an infected area within two weeks prior to arrival in the country. There is a reciprocal health agreement with the UK and most EU countries, whose citizens are entitled to free or low-cost emergency medical treatment on presentation of a European Health Insurance Card (EHIC). Medical insurance is advised for other nationalities. Outbreaks of the deadly strain of bird flu were confirmed in 2006, but no new cases or human infections have been reported. The risk to travellers from bird flu is very low, but close contact with live birds should be avoided, and all poultry and egg dishes well cooked as a precaution.

The three official languages are Swiss German, French and Italian. A few people speak Romansch, but this is confined to the southeastern corner of the country. Most people know at least three languages, including English.

The official currency is the Swiss franc (CHF) divided into 100 rappen (German) or centimes (French). Although not part of the EU many prices are nonetheless indicated in Euros and some merchants may accept Euros. Visa, MasterCard and American Express are widely accepted and ATMs are widespread; many are equipped with the Cirrus or Maestro system. Banks offer the best exchange rates for travellers cheques and foreign currency, but it is also possible to exchange money at major hotels, main train stations and airports. Banks are open Monday to Friday.

Travellers must have all documents necessary for their next destination and passports must be valid at least three months beyond period of stay if a visa is required. The borderless region known as the Schengen area includes the following countries: Austria, Belgium, Czech Republic, Denmark, Estonia, Finland, France, Germany, Greece, Hungary, Iceland, Italy, Latvia, Lithuania, Luxembourg, Malta, The Netherlands, Norway, Poland, Portugal, Slovakia, Slovenia, Spain, Sweden, and as of December 2008, Switzerland. All these countries issue a standard Schengen visa that has a multiple entry option that allows the holder to travel freely within the borders of all. It is highly recommended that passports have at least six months validity remaining after your intended date of departure from your travel destination. Immigration officials often apply different rules to those stated by travel agents and official sources.

Switzerland has a low crime rate compared to other European countries and is generally a safe country to travel in, however there has been a recent increase in petty theft and visitors should be alert to pickpockets and thieves, particularly in the city centres and on public transport. Be aware of robberies on overnight trains.

Local time in Switzerland is GMT +1 (GMT +2 between March and October).

A 15% service charge is normally included in all hotel, taxi, bar and restaurant bills in Switzerland, and further tipping is not necessary, but small change left over is appreciated.