South Africa as a holiday destination is unparalleled. Nowhere else in the world will you find such breathtaking scenery, magnificent beaches, variety of wildlife, and top class accommodation, food and wine - vital ingredients on every holidaymaker’s wish list.

South Africa is located on the southern tip of Africa and has 2,798 kilometres of coastline, surrounded by the Atlantic and Indian Oceans. South Africa has a large number of game reserves to visit, with Kruger National Park and the Eastern Cape topping the list. South Africa has numerous world-class vineyards to tour, with the most famous found in the Franschoek and Stellenbosch regions in the southwest, close to Cape Town. For sun-worshippers and surfers, South Africa has some of the finest beaches in the world. And for fishing enthusiasts, the country has numerous dams, lakes, rivers and streams, as well as plenty of offshore challenges. And let's not forget South Africa's eclectic mix of cities, from Cape Town to Johannesburg and the fascinating and colourful cultural villages and festivals across the country. South African cuisine is heavily based around meat and the braai, or barbecue, is a popular social event.

The Republic, comprising the southern tip of Africa and surrounded on three sides by the Atlantic and Indian Oceans, offers a taste of the African experience with the chance to visit traditional tribal villages, game reserves and sprawling townships. At the same time it also offers all the pleasures of a first world holiday experience, with luxury hotels, sophisticated shopping, exciting theme parks and clean beaches. Have breakfast in a New York-style deli; lunch in an African shebeen; cocktails on a sunset cruise; and dine in style in a fine British colonial restaurant. This is all possible in a South African city.

It is not only cultural diversity that makes South Africa magical. The country has a wealth of animal and plant life scattered across its varied climactic zones from desert to snow-covered mountains, forests to grasslands and mangrove swamps. Historically, too, there is plenty to discover, from the fossils of ancient hominids, to the pioneering spirit of the Dutch 'voortrekkers' and the settlement of the Eastern Cape frontier by the British colonialists. 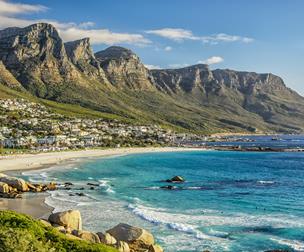 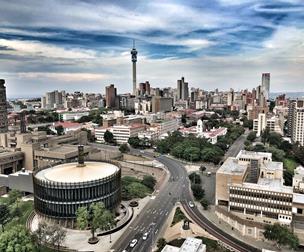 South Africa is a sightseer's paradise, with plenty to see and do no matter what your interests, time frame, age, or inclination.

There is natural splendour in abundance from the iconic Table Mountain, magnificent Drakensberg, and Blyde River canyon to gorgeous beaches and beautifully scenic drives. South Africa as its share of history, too. Boer War battlefields and Apartheid attractions draw equal numbers of visitors, while heritage towns like Franschoek have much to offer.

The country is easy to get around with competitive low-cost carriers, long distance buses, good value car hire and the best roads in Africa (although some of the worst drivers are on them.) The country is ideal to visit all year round, although summer holidays over December and January are when locals tend to flock to the coastal towns and hence accommodation can be scarce.

South Africa is one of the few global destination that can offer the complete holiday experience, with a huge variety of world class attractions and compelling experiences, and incredible value to boot.

South Africa's multicultural status means that business etiquette may vary with different people, and according to individual sectors, though it is most often similar to dealings in Europe and the United States. Although there are 11 official languages, English is the primary language of business. It is best to dress formally for initial meetings. Generally South Africans are regarded as relaxed and informal with regards to introductions and the handling of business cards. Shaking hands is common for both men and women. The giving of gifts is uncommon and unnecessary. Business hours are generally 9am to 5pm Monday to Friday with an hour taken over lunch from 1-2pm.

South Africa is a large country and has diverse climactic regions, but in general the weather is sunny and hot in the summer months (December to April), and mild during winter (May to November). Winters in the Cape are cold and wet, and snow falls on the mountain ranges here and in Natal. Gauteng and the northern areas experience thunderstorms regularly during evenings in the summer months, and winters are usually warm during the day and cold at night.

The international access code for South Africa is +27. The outgoing code is 00 followed by the relevant country code (e.g. 0044 for the United Kingdom). As of 8 January 2007, South Africa has changed to 10-digit dialling (so city codes must be included, e.g. 021 for Cape Town) and international dialling has changed from 09 to 00. GSM mobile phone networks providing 900 and 1800 frequencies serve the country. Mobile service providers offer very cheap 'pay-as-you-go' Sim cards, which are a good option for visitors staying for some time. Internet cafes are widespread. Card and coin operated pay phones are also widespread.

South African culture and etiquette in urban areas is very Western. While standards of dress vary, beachwear is not to be worn off the beach, and nude sunbathing is only permissible in a very few designated areas. While in African townships it is frowned on for women to wear pants or shorts and homosexuality is frowned on, whereas it is legal and acceptable in all other areas. Although locals may complain loudly about the country and government, they will take offense if a foreigner is critical. Racism is a sensitive issue, however interracial relationships are widely accepted. South African racial terminology differs from what is acceptable in North America: the terms 'black' and 'white' are appropriate for those of African and Caucasian descent, respectively. 'Coloured' refers not to black Africans, but those of mixed African and European descent and is not considered an offensive term. South Africans are friendly and hospitable, and will often go out of their way to assist tourists who need help.

Travellers to South Africa do not have to pay duty on 400 cigarettes, 50 cigars and 250g of tobacco; 2 litres wine and 1 litre spirits; perfume up to 50ml and 250ml eau de toilette; and other goods to the value of R3,000. All other goods brought in from abroad by South African residents must be declared on arrival. These will be subject to import duties. For goods to be re-imported, travellers must complete a DA65 or NEP-form that is issued on departure. Prohibited items include meat and dairy products, all medication except for personal consumption, flick knives, ammunition, explosives and pornography containing minors and bestiality.

Electrical current is 230 volts, 50Hz. Round, three-pin plugs are standard.

Health regulations in South Africa require that travellers from areas infected by yellow fever must carry a vaccination certificate; otherwise no vaccination is required. There is a malaria risk in the low-lying areas of the Northern Province and Mpumalanga (including the Kruger National Park), as well as north-eastern KwaZulu-Natal, and precautions are advised when travelling to these areas. There is a high prevalence of HIV/AIDS. Tap water is safe in urban areas but sterilisation is advisable elsewhere, as there are periodic outbreaks of cholera in the poor communities of rural South Africa, particularly in Northern KwaZulu-Natal, Mpumalanga, and Limpopo provinces. Drug-resistant TB has been reported throughout the country. Food poisoning is rare. Medical facilities in South Africa are good, but medical insurance is strongly advised as private hospitals expect cash upfront and public hospitals are best avoided.

South Africa's currency is the Rand (ZAR), which is divided into 100 cents. Money can be exchanged at banks, bureaux de change and the larger hotels. ATMs are widely available (there is a daily limit for cash withdrawals) and major international credit cards are widely accepted, except in petrol stations where cash is required. Visitors should be vigilant when drawing cash from ATMs, as con artists are known to operate there. Travellers cheques and some foreign currencies are accepted at larger hotels and shops, but commission is charged, otherwise all commercial banks will exchange them.

Passports should be valid for at least 6 months beyond the period of intended stay. An onward or return ticket is required and evidence of sufficient funds. Note that visitors to South Africa must have at least oneblank (unstamped) visa page in their passport, each time entry is sought; this page is in addition to the endorsement/amendment pages at the back of the passport. However nationals of countries that require a visa before travelling to South Africa, must have twoblank pages in their passport - one for issuing a visa prior to departure and one for stamping at the port of entry when entering South Africa. Immigration officials often apply different rules to those stated by travel agents and official sources.

Safety is an issue and visitors to South Africa should be aware of the country's high incidence of crime. Although this tends to be concentrated in pockets throughout the country, for example in the township areas, opportunistic crime is fairly widespread. Travellers should always be aware of these risks and exercise the necessary precautions. Doors should be locked when driving and one should not walk alone at night in city streets, isolated beaches or remote areas. Berea and Hillbrow in Johannesburg are high-risk areas and visitors should be cautious in these areas. There have been recent incidents of robbery involving hikers walking on Table Mountain and Lions Head in Cape Town so visitors should avoid hiking alone. Be vigilant when using ATMs and do not display signs of wealth (e.g. mobile phones, money, expensive jewellery) on the streets. It is worthwhile noting that the South African authorities do give high priority to the protection of tourists. Power outages are common throughout the country; frequent blackouts and rolling power cuts in January 2008 has forced the government to acknowledge that the country has an electricity crisis on its hands.

Waitering is a livelihood and a tip of 10% is expected for good service, if a service charge is not included in the bill. Tipping for services rendered is widely anticipated by porters, taxi drivers and petrol attendants. Golf caddies should be tipped accordingly. 'Car guards' operate in the city centres and tourist spots and will offer to look after your parked car; they are usually immigrants from neighbouring countries looking for work and will expect anything from R2 upwards on your return.