The sun never quite sets in Finland, which extends well into the Arctic Circle, in summer time, but it also never quite rises during the winter in this scenic country of lakes, islands, forests, pristine wilderness and super-modern technology.

This land of contrasts is full of plenty to delight, amuse, inform and enchant the visitor, from its forbidding castles and onion-domed Slavic churches to the reindeer herds of the indigenous Sami people in Lapland in the north. The lively, modern capital city of Helsinki is packed with galleries, museums and cafes, but beyond, in the countryside, there are miles of pristine wilderness to explore in the rare clean, clear air as 69 percent of the country is covered in forest and there are 35 national parks to explore.

You can come in from the cold to a sauna, as Finland invented them. In fact, the country has an unbelievable 1.6 million, so you'll be hard-pressed to avoid them. Despite its seemingly rugged nature, Finland is by no means a backward country. In fact it is regarded as being one of the most hi-tech societies in the world, with Internet connections per person surpassing that of the United States and United Kingdom.

Dine on reindeer steaks, visit Santa Claus in his northern Arctic home, ski or dog sled across miles of virgin snow, or tap your toes at one of the numerous music and folk festivals held throughout the year. It is not surprising that Finland has been described as the most underrated tourist destination in Europe. 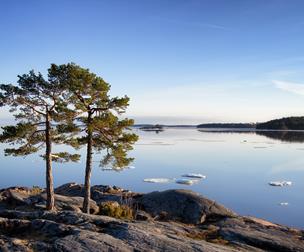 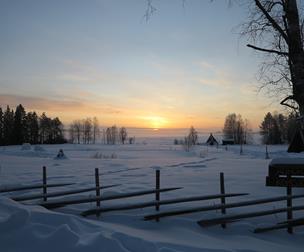 Business is conducted formally in Finland. A formal understated sense of dress is important. Punctuality is also very important in Finland and being late is considered rude. Appointments should always be made and confirmed. Meetings are often strictly business and are not often over lunch. Finns do not require a strong relationship prior to doing business, and business often takes place over the phone, fax and via e-mail. However, the sauna is an important part of the culture and it is not unusual for business to be discussed in this environment on a more sociable level. Finns are very direct and prefer getting straight to the point. Often a verbal agreement may hold. At meetings business cards are exchanged and should have, on the alternate side, details in Finnish. Business hours are generally 8am to 4.15pm Monday to Friday.

In general Finland has an extreme swing between summer and winter, with bitterly cold winters when temperatures drop to -4ºF (-20ºC) in many areas, particularly in northern Lapland. Summer, by contrast, can be warm with temperatures rising to 68ºF (20ºC) or more. Temperatures as high as 86ºF (30ºC) are possible in the south and east of the country. The capital, Helsinki, remains fairly temperate varying between an average of 63ºF (17ºC) in July to 23ºF (-5ºC) in February. In the far north the sun does not set for about 73 days during summer, while in winter the sun remains below the horizon for a 51-day stretch.

The international country dialling code for Finland is +358. The outgoing code is 00, 990, 994 or 999, followed by the relevant country code (e.g. 0044 for the United Kingdom). The city code for Helsinki is (0)9. Mobile phone networks cover much of the country; the network operators use GSM networks, which are compatible with most international mobile operators. Besides public telephone booths and hotels, calls can be made from post and tele offices. Internet cafes are available in major towns and cities. For international telephone enquires visitors should call 020208, and for local enquiries dial 020202.

A Finnish way of life, the sauna is a popular activity in Finland, so expect to encounter one. Words are taken seriously in Finland and people are held to what they say, so think before you speak.

Travellers to Finland arriving from the EU can enter Finland without restrictions on the quantity of purchases, provided they have been bought in the EU for personal consumption or as gift items. No restrictions are placed on meat and dairy products. Some restrictions may apply to selected tobacco products. Travellers over 17 years arriving from non-EU countries are allowed to bring in the following items without incurring customs duty: 200 cigarettes, or 100 cheroots, or 50 cigars, or 250g of tobacco. Travellers over 20 years can bring in 1 litre of spirits with maximum 22% alcohol content, or 2 litres of fortified or sparkling wine not exceeding 22% alcohol content, and 2 litres of non-sparkling wine and 16 litres of beer; perfume up to 50g and 250ml of eau de toilette; and other goods for personal consumption to the value of EUR175.

Electrical current is 220 volts, 50Hz. Standard European two-pin plugs are in use.

There are no health risks associated with travel to Finland. Visitors to the Aland Islands in the summer months should be cautious of tick-borne encephalitis. Medical care is of a good standard. British, and other EU nationals, should ensure they take a European Health Insurance Card (EHIC), which entitles citizens to emergency medical treatment on the same terms as Finnish citizens. Comprehensive travel insurance is advised.

Finnish and Swedish share status as Finland's official languages. Sami is spoken by the isolated population group in Lapland. English is taught at schools and is widely understood.

The Euro (EUR) is the official currency of Finland. One Euro = 100 cents. Banks, ATMs and bureaux de change are available in all cities and airports; banks are closed on weekends. American Express, Diner's Club, Eurocard, Access, MasterCard and Visa are accepted in hotels, restaurants, and larger shops. Travellers cheques can be cashed in Helsinki and large cities, but ATMs are the easiest and most economical way to get cash.

The borderless region known as the Schengen Area includes the following countries: Austria, Belgium, Czech Republic, Denmark, Estonia, Finland, France, Germany, Greece, Hungary, Iceland, Italy, Latvia, Lithuania, Luxembourg, Malta, The Netherlands, Norway, Poland, Portugal, Slovakia, Slovenia, Spain, Sweden and Switzerland. All these countries issue a standard Schengen visa that has a multiple entry option, and which allows the holder to travel freely within the borders of all the aforementioned countries. Additionally, travellers to Finland must hold sufficient funds for their duration of stay in the country, a return or onward ticket, and the necessary travel documentation for their next destination. Also note that joint passports must include a photograph of the spouse and, if issued after May 1, 2004, a photograph of each child over seven years of age and up to and including 15 years of age. Otherwise, a photo identification card showing the child's name, date of birth and nationality must be presented, together with the passport. NOTE: It is highly recommended that your passport has at least six months validity remaining after your intended date of departure from your travel destination. Immigration officials often apply different rules to those stated by travel agents and official sources.

Crime levels are low in Finland and visitors can be assured of a trouble-free vacation. Drug offences and drinking and driving are dealt with very harshly. The main danger in the country is driving during the winter months, when icy roads are a hazard and cars must be fitted with snow tyres.

Tips are not expected in Finland because a service charge is generally added to restaurant, bar and hotel bills, but customers often choose to round up the bill when paying in cash. Taxi drivers also appreciate any small change or coins that are added to round up the fare.