As Russia moves forward into the 21st century, it leaves behind a turbulent history of tyranny and a crippled economy: from Ivan the Terrible to Peter the Great, from the fall of the Tsars to the dictatorship of the Soviet government; today Russia is a nation embracing its newfound freedom and future potential, whilst enjoying a renewal of the rich cultural heritage of its past.

Despite the visible effects of hardship and economic disparity, and its previous isolation from the rest of the world, travellers will encounter a country of enormous diversity and vitality, with cultural treasures and historical monuments, great imperial cities and glittering cathedrals. Visitors will experience the enchantment of Tchaikovsky, the Kirov and Bolshoi Ballet, and marvel at priceless Russian icons and the unique style of decorative onion-domed architecture.

Most westerners associate Russia with the great imperial centres of Moscow and St Petersburg, and although these two cities, the capital and the beautiful 'Venice of the North' are a must-see, they are a mere scratching on the surface of this vast and varied land.

Straddling two continents and 11 time zones, the Russian Federation is the largest country on earth, nearly twice the size of the United States of America. Within this impressive expanse lie natural wonders such as Lake Baikal, the deepest lake in the world, and beautiful mountains, rivers and forests abounding with wildlife as well as timeless traditional villages scattered across the Siberian landscape.

Visitors taking the opportunity to explore Russia will not be disappointed: its impressive museums, overwhelming sense of history, culture and unspoilt wilderness will leave one with a desire to see more. 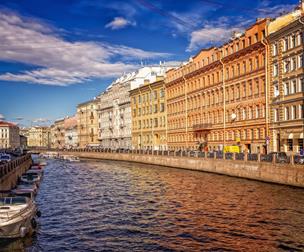 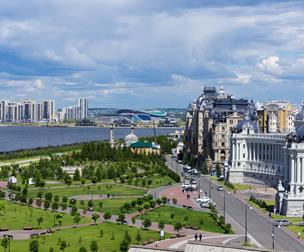 By some measure the largest country in the world, Russia holds a wealth of sightseeing opportunities across all 11 of its time zones, incorporating the largest forestland and freshwater supply in the world. It's little wonder that Russians refer to their country as the Motherland - it is, undeniably, one bountiful place. Seeing Russia in all her glory would be a mighty, and time-consuming, feat.

Most visitors will stop first at the popular cities of the north-west, Moscow and St Petersburg - notable for the roles they played in the Napoleonic Wars and World War II. Moscow was the site of the bloodiest battle Napoleon described as ever having seen while St Petersburg was witness to both the Russian Revolution of the 1700s and the Russian Civil War of the 1900s. Thus both cities boast an abundance of ornate war memorials, museums and sites dedicated to their cataclysmic history.

In St Petersburg, the State Hermitage Museum captures ancient to modern Russian history in the six buildings which make up the Winter Palace - the former residence of the tsars. The Moscow Kremlin is a citadel complex, the most popular of the Kremlin buildings; alongside it is Red Square, Moscow's broad and bustling city square adorned by the famous Basil Cathedral.

The Bolshoi Ballet Theatre, in neighbouring Theatre Square, is one of the most ornate theatres in the world and is home to the world's oldest and most successful ballet company. Russian architecture is an attraction unto itself and the cathedrals of Moscow in particular, prove a popular marvel for tourists the world over.

There is, however, more to see in the west by way of both history and natural splendour. Russia is jokingly referred to as the 'lungs of Europe' due to the expansive forestland, which absorbs 15% of the world's carbon dioxide. As you progress east, the forest becomes more dense and overwhelming.

The best way to take in the Russian countryside is by train, as the trans-Siberian Railway winds south-east from Moscow on the same route that once transported prisoners of Stalin's Purges to Gulag labour camps. Travel down to Lake Baikal, the deepest and largest lake (by volume) in the world and a UNESCO World Heritage Site, where there are several beautiful resorts along the lakeside.

Russian business is conducted in a fashion similar to Western countries with subtle differences. Russians are business-minded so it is not necessary to form personal relations but developing a good network of resident associates is a good idea.

Dress is formal and conservative and on greeting a good firm handshake and direct eye contact indicates strength. Business cards are exchanged and it's advisable to get a Russian translation of your details on the alternate side. Business hours are generally from 9am to 6pm from Monday to Friday.

The main holiday season for Russians and foreigners is during the warmest months of July and August, but it also rains a lot at this time. The best times to visit are May and June or September and October, avoiding most of the crowds and the rain. Winters are very cold and bitter, especially in Siberia.

The international access code for Russia is +7. When calling Russia from abroad, the initial zero on the area code must not be omitted. The outgoing code is 8 followed by 10 (a second tone should sound after 8), followed by the relevant country code (e.g. 81044 for the United Kingdom). City/area codes are in use, e.g. 495 for Moscow and 812 for St. Petersburg. Public phones are good for local and international calls; they take phonecards, which can be bought at newspaper kiosks and post offices.

Phone booths in airports and major hotels usually take Amex or Visa cards but are generally much more expensive than street phones. Mobile phones work in most large towns and cities. There are numerous local operators using GSM 900/1800 networks, each covering relatively small areas. Internet access is available at Internet cafes throughout the major towns and cities.

Photography of anything to do with the military, strategic sites, or the airport, is prohibited. It is impolite to refuse alcohol, food and gifts. In Russian Orthodox churches, women are advised to wear skirts and cover their heads with a scarf. It is a legal requirement for visitors to carry passports for identification; copies are not sufficient.

Tourists must complete a customs declaration form, to be retained until departure, allowing for the import of articles intended for personal use (including currency and valuables) which must be registered on the declaration form. Customs inspections occur. 250g of caviar per person may be exported, with a receipt proving it was purchased at a store licensed to sell it to foreigners and a licence from the Ministry of Economical Development.

Electrical current is 220 volts, 50Hz. Round two-pin plugs are standard.

Travellers to Russia are advised to have up-to-date vaccinations for hepatitis A, tuberculosis and typhoid fever (long-term travellers), as well as medications for travellers' diarrhoea. There is also a risk of tick-borne encephalitis in rural and wooded areas, particularly in the Ural and Siberian regions. HIV/AIDS is on the increase. Measles outbreaks occur. Drinking water should be treated; bottled water is readily available.

There is a reciprocal health care agreement with the UK entitling citizens to free health treatment in hospital. Local state medical facilities are of a low standard, however, and visitors are strongly advised to have full insurance for medical treatment and accidents should they require private care.

Blood transfusions should not be performed in Russia, due to uncertainties concerning the blood supply. Essential medications and supplies may be limited. There have been outbreaks of bird flu in a number of regions of Russia, including around Moscow, but there have been no reports of human infection. Travellers are advised to avoid contact with domestic, caged and wild birds and ensure that all poultry and egg dishes are well cooked.

Russian is the official language. Some people speak English, French or German.

The official currency is the Rouble (RUB), which is divided into 100 kopeks. Most major credit cards, like Visa and Mastercard are accepted in the larger hotels and at places that deal with foreign tourists. Currency can be changed at banks, currency exchange booths and hotels.

Travellers cheques are difficult and expensive to cash, but if necessary it is advised to take them in US Dollars or Euro. ATMs are widely available in major cities. It is hard to get rubles outside Russia and travellers are advised to take good condition US dollars or Euro notes to change once there. It is illegal to pay for goods or services in hard currency, though it is often accepted.

Valid visas in expired passports or other expired travel documents are not accepted. Visitors must carry ID at all times whilst in Russia; a photocopy of your passport and visa will suffice. An Immigrant Card will be issued on board the aircraft or on arrival.

All visitors staying for longer than three days must register with the local police upon arrival; if staying in a hotel, the hotel will arrange this. Anyone travelling on a tourist visa must hold vouchers from the hotel or travel agency.

Passengers are required to hold return/onward tickets and documents required for the next destination. Exit permits are required on departure. These are usually issued with the visa, or can be obtained at hotels not less than two days before departure.

Passports must be valid for period of intended stay. It is highly recommended that passports have at least six months validity remaining after your intended date of departure from your travel destination. Immigration officials often apply different rules to those stated by travel agents and official sources.

Travellers are advised against all travel to Chechnya, Ingushetia and Dagestan because of the security situation in the North Caucasus, including the regions of Budyonnovsky, Levokumsky, Neftekumsky, Stepnovsky and Kurskoy.

Travellers are advised against all but essential travel to North Ossetia, Karachai-Cherkessia and Kabardino-Balkaria (including the Elbrus area) as terrorism and kidnapping in these regions persist. Between April and August 2008, there was a series of explosions in and around Sochi.

There is a high risk of domestic terrorism throughout Russia, particularly in Moscow and North Caucasus, with suicide bombings and explosions in public areas and on public transport, and hostage-taking is a serious threat. Visitors are advised to be vigilant and to watch out for pickpockets and street crime.

Hotel bills in the large Russian cities include a 10 to 15% service charge; otherwise 10% is usual. If a service charge hasn't been added at a restaurant, a 10% tip is expected. City Guides and their drivers also expect a small tip and tipping in bars and nightclubs is common.